In the year since then, more than 20 faculty from physics, chemistry and engineering departments at four higher education sites (University of Nebraska-Lincoln, University of Nebraska at Omaha, University of Nebraska at Kearney, and Creighton University) began work in EQUATE’s three Focused Research Group (FRG) collaborations. These FRGs are roughly aligned with theories, experiments, and applications related to understanding nanoscale features of materials that could help build quantum computers, sensors, and other technology for national and international benefit. In addition, EQUATE personnel have developed outreach resources for Nebraska’s students – to promote learning of science, technology, engineering, and math (STEM).

Joining the UNK faculty in August 2022, Wysocki earned his Ph.D. in Physics at the University of Nebraska-Lincoln, where he had been a Graduate Teaching Assistant and a Research Associate. After working as a postdoctoral research associate at UNL and Cornell University, he held scientific positions at Ames Laboratory and Virginia Tech University.

Also in EQUATE’s Year 1, one of the original faculty participants--Dr. Ralph Skomski of UNL Physics and Astronomy--died suddenly at home on April 10. Skomski had worked at UNL since 1998 and was valued for his theoretical research expertise, with more than 425 papers, books, and book chapters published during his career. EQUATE’s Management Team considered successor candidates and decided that UNL Physics Assistant Professor Robert Streubel would be invited to join the project. Streubel, who received NSF’s CAREER Award in 2022 for his work on “Magnetic order in disordered dipolar nanostructures,” had previously earned Nebraska EPSCoR’s FIRST Award for early-career faculty research development. 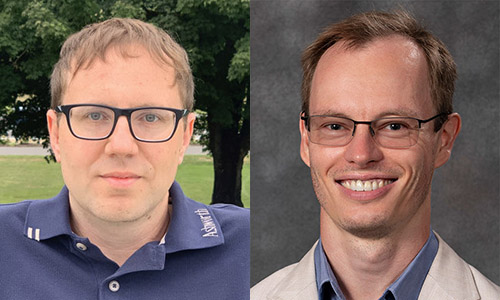 Caption: Aleksander Wysocki (left)is a new assistant professor in the University of Nebraska-Kearney physics program; he is supported in part by Nebraska's NSF-funded EQUATE project. Robert Streubel (right), an assistant professor with the University of Nebraska-Lincoln Department of Physics and Astronomy, joins EQUATE after the death of Ralph Skomski in the spring of 2022.