Michael Tross came to Nebraska as a sprinter at Doane University, but he has stayed for the long haul. He earned his bachelor’s degree in Biological Sciences at Doane, then continued with master’s level courses in Business Management. With his longterm interest in biology, plus mentoring from Doane Biology’s Associate Professor Tessa Durham Brooks, he next focused on plant science. His timing was fortunate: in 2016 Doane became part of Nebraska’s Center for Root and Rhizobiome Innovation (CRRI), funded by the National Science Foundation’s EPSCoR program.

As Tross worked on Doane research to determine whether seed size affects the exudation of amine-containing compounds by maize seedling roots, he learned to code in Python and do basic image processing using OpenCV libraries. He also mentored two Young Nebraska Scientists High School Researchers at Doane Bio; Tross had taught high schoolers in St. Kitts, where he grew up and earned his associate’s degree in environmental studies (as a biology mentor he also applied what he valued from being a mentee at Doane).

Realizing his interest to learn more about plant genetics and data science, Tross entered the University of Nebraska-Lincoln’s (UNL) Complex Biosystems PhD program and began a series of lab rotations in Fall 2019. His second of three rotations was with UNL Agronomy and Horticulture Professor James Schnable; Tross joined the Schnable Lab in the summer of 2020, and his PhD is funded by a CRRI follow-on project that's led by Associate Professor Yufeng Ge (with UNL Biological Systems Engineering) in collaboration with Schnable. Again, Tross’ timing was excellent; he pursued research focused on leaf canopy architecture in sorghum, and the genes governing leaf angles (having greater importance as plants are placed closer together to increase yield per hectare). On his project to grow a diverse panel of sorghum genotypes (366 plants from 236 genotypes at three different timepoints), Tross was aided by another CRRI-funded YNS High School Researcher, Ryleigh Grove; she had no prior experience with Python but with encouragement from the Schnable Lab team, she quickly gained expertise.

Tross's biotechnology experience at Doane was a strong foundation as he ramped up his skills in this sorghum research. After image processing, measurements, DNA sequencing, and statistical analysis, this “Genome-Wide Associated Study” (GWAS) offered findings for a paper he authored with the lab team. With the paper submitted and in review for publication, Tross hopes it will be published in 2022; meanwhile he looks forward to advancing in his PhD path—potentially leading to a career in industry. His background in Business Management will also serve him well in this endeavor.

His time in Nebraska has “expanded my perspective,” Tross says; when he arrived, he didn’t see himself going past the bachelor’s degree level. He hopes that NebraskaEPSCoR can keep building people’s confidence, by continuing to provide opportunities that help more minorities in STEM (Science, Technology, Engineering and Math): to imagine the possibilities, picture themselves being part of the endeavors, and access ways to learn and become more capable—so they gain confidence in achieving their potential.

Image caption: Michael Tross works in a UNL lab as he pursues his Ph.D. in Complex Biosystems (courtesy photo). 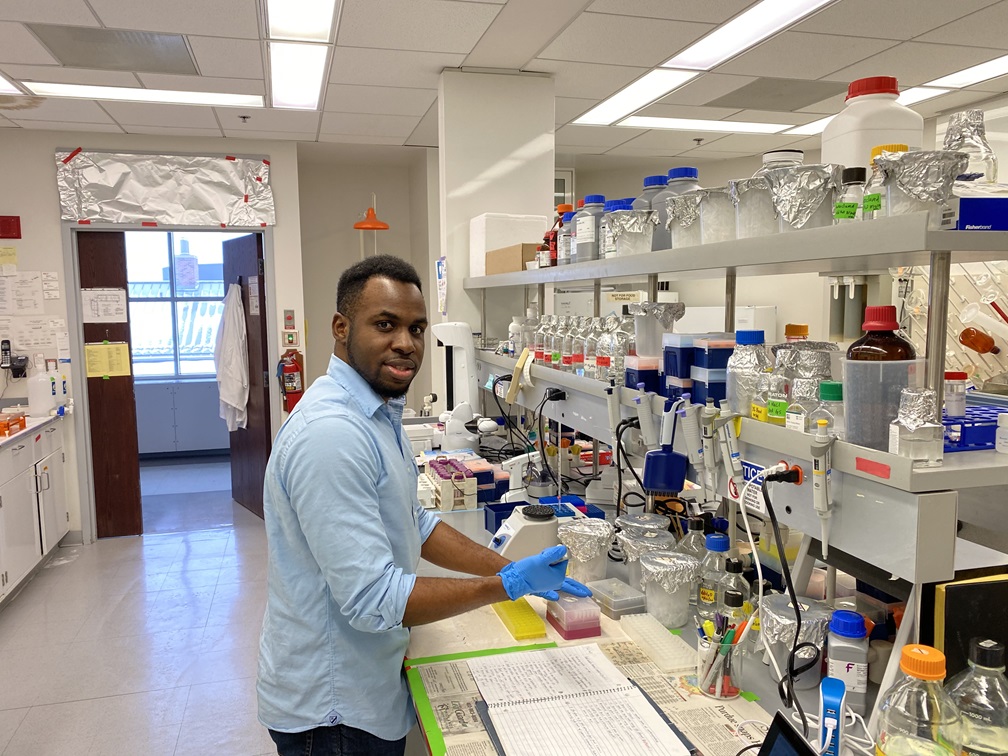