Nebraska Wesleyan University Biology Professor Angela McKinney had long hoped to lead an intensive summer research program for her students, and funding via Nebraska EPSCoR finally made it possible.

For the month of June 2018, 10 NWU undergraduate students--who had just completed the introductory biological inquiry course at NWU and expressed interest in pursuing biology careers—were guided by McKinney and two upper-class students.

“Each student worked on three different projects all related to bacteriophage (virus that infects bacteria) biology,” said McKinney. “Students were exposed to different aspects of research that included making media, performing experiments, keeping a laboratory notebook, reading and discussing scientific articles related to the research, and communicating their findings in writing and orally.” The latter included forming 3-4 person teams and giving a formal presentation, plus generating research posters.

Students’ post-experience comments indicated they had gained confidence in their ability to work in a laboratory setting, learned valuable research skills, improved their critical thinking skills, made connections between scientific literature and what they were doing in the laboratory, and developed experience in presenting their findings to others.

“Feedback from students about their experience was overwhelmingly positive,” McKinney added. “They were surprised at how much they were able to accomplish in such a short amount of time and how much they learned. Students also commented that the experience could have been 2-4 weeks longer.”

“EPSCoR provided the ideal mentoring environment for Dr. McKinney and her students, who worked side by side in a laboratory setting during the summer,” said NWU Provost Graciela Caneiro-Livingston. “Since the students were at an early stage in their education, this experience allowed them to reinforce their identity as future scientists. This program is a model for the type of mentoring our university seeks to provide for every student.” 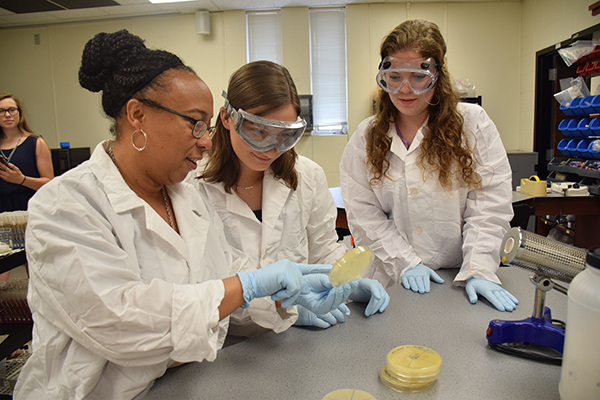