This project is building genome to phenome linkages using automated image-based phenomics approaches in combination with transcriptomics and metabolomics applied to wheat and rice diversity panels. Genes and pathways discovered from this approach will be functionally tested for their role in improving the temperature resilience in rice and wheat.

UNL School of Biological Sciences’ Jay Storz, Colin Meiklejohn and Kristi Montooth are leading the UNL group with Using Natural Variation to Educate, Innovate, and Lead (UNVEIL): A Collaborative Research Network to Advance Genome-to-Phenome Connections in the Wild. With colleagues from the University of Montana, the $4 million UNVEIL project will address fundamental scientific questions that are relevant to local adaptation and conservation of wild populations. The team, including early career faculty and students, will use newly developed genomic technologies to understand the genetic basis of traits that influence the survival of wild animals and plants in changing environments.

UNVEIL research aims to advance the understanding of how organisms cope with environmental challenges, and generate fundamental knowledge about how complex traits arise from variation in genomes--with implications likely extending to conservation biology, agriculture, and medicine. Engaging an interdisciplinary group of philosophers, geneticists, wildlife biologists, and natural resource managers, this project will help form guidelines for the application of genomic information to conservation—for example, to help determine when and how genomic interventions should be used.

Nebraska’s Jim Van Etten, William Allington Distinguished Professor of Plant Pathology, is a co-PI on G2P in VOM: An Experimental and Analytical Framework for Genome to Phenome Connections in Viruses of Microbes. This $5,999,124 project’s team--including scientists from University of Delaware, the University of Hawaii and Roger Williams University--will study how viruses in soils, sediments, and water environments infect microbes and impact ecosystems. The details of the viral-microbe interactions are largely unknown, and this project seeks to advance the ability to predict the phenomic features of the viruses of microbes (VoMs) from genomic data.

G2P in VOM will focus on viruses that infect marine and freshwater phytoplankton, and viruses that infect a bacterial group that forms a symbiosis with important legume crops, most notably, soybeans. Global phytoplankton populations create vast stores of biomass that support the nutritional needs of larger aquatic organisms, and sustain half of the oxygen within earth’s atmosphere. Enhanced understanding of genome to phenome links within phytoplankton viruses will aid in improving models that predict the impacts of excess carbon and nutrients on ecosystems.

Better understanding of genome to phenome connections for viruses infecting bacterial symbionts of legumes could eventually lead to new technologies for improving the productivity of critical agronomic crops such as soybeans. The project team’s faculty, postdocs and students will collaborate on research, share best practices and mentoring, plus prepare educational materials and provide summer camp opportunities for middle and elementary school students. 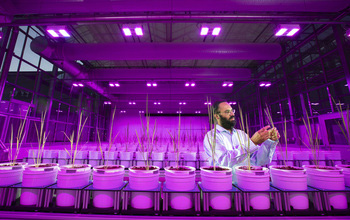